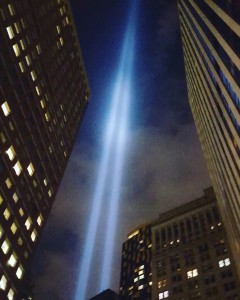 Last night as we strolled through Wall Street taking in the sights and sounds… simultaneously we looked up…embracing a moment we will never forget …arm in arm with my close friend from France we looked at each other… then looked up to the beaming lights to heaven…feeling the same heartfelt sadness of what has happened to our countries.

I remember that morning 9/11. I was flying to Florida at 8 a.m. for a meeting. I couldn’t believe the unreliable US Air flight arrived in Orlando 30 minutes early… all of us were surprised and applauding. The roars of cheer were quickly stifled. When I turned my phone on… there were 50 messages asking me if I was okay and if I knew… I hung up the phone and stood up in the main cabin shouting out to all the passengers to phone home….let your family and friends know you are okay.  From that minute on our lives as we know it, our country as we know it… changed the world as we know it… and our hopes and dreams have changed…

We will never forget… We will stand United… and we will show them that our lives haven’t changed. We will continue to fight this war on terror… to make this a better world for our family… our children… our friends… and generations to come. I am proud to be an American… I am proud to be in New York City on the 15-year anniversary of 911 and I am proud that we are ONE, WE ARE FREE, AND WE BELIEVE …

Beaver Tales: Stories from Below the Belt is available at:   Amazon.com, BarnesandNoble.com and www.BeaverTalesBook.com 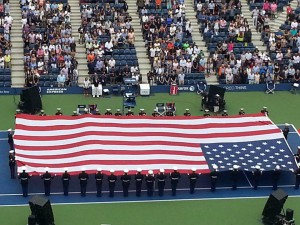 Only in my dreams…but DREAMS come true! I haven’t made it to the greatest tennis event this year…YET! But hold on to your racquet, I will be headed to NYC in hopes of watching not only the best in sport, but also the amazing 17-year-old, young American girl who is giving everyone a run for their money!

For those of you who may not know, I LOVE tennis. And those of you who do know me, say I’m obsessed! For several years I’ve captained two USTA teams, Women’s and Mixed. I sleep, eat and live tennis. So when the one of the greatest tennis events lights up NYC, I’m on the fast train from Philly!

When do you have a chance to hang out in Gotham with the coolest tennis fans and players from around the world? For me…never, unless it’s the OPEN! It’s truly a fantastic sport. Last year was a dream come true! Being Italian, there was nothing better than watching two best friends and doubles partners battle for #1 Singles! Yes, Vinci and Pennetta! LOVE them!

CiCi Bellis is a mere pup in the world of tennis, and honestly, in the world of life! I marvel at this slight sized 5’7”, 110lb, young lady from California who is shaking up tennis players from around the globe. And TONIGHT she is taking on the Number #2 player in the world! She should have lost in the first round. Then she should have lost in the second round. Somehow, some way CiCi fought her way into the third round of a major tournament. While realistically I could be her mother, I find this Little Engine That Could… to be an inspiration, not just in the world of tennis but in life. She has handled herself, the media attention, and the pressure, with grace.

This C.C. found a little something of herself in this young and talented CiCi…. Age is just a number, it’s irrelevant, jump off that cliff, land on your feet and scale up the other side and never, ever be afraid to take on the big dogs, because you never know-you may just win!

YOU GO GIRL! Good luck CiCi! This C.C. is CHEERING for YOU!

Don’t forget Tuesdays Tips & Tales with C.C. LIVE! 7pm EST on Beaver Tales Facebook Fan page and remember – nothing is ever off limits!

Beaver Tales: Stories from Below the Belt is available at: Amazon.com, BarnesandNoble.com and www.BeaverTalesBook.com