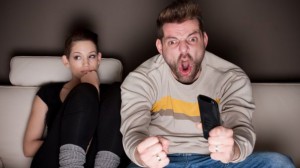 It’s that time of year AGAIN!  Couch potatoes, bar mongers, season ticket holders and tailgaters gear up for FOOTBALL SEASON! As you cram in the last days of summer your guy secretly escapes to the local bar to take in pre-season competition. Then it’s FULL ON primetime NFL madness from September through January!

Studies confirm men think about SEX nineteen times a day. What about Football? While the stats remain a mystery, my football junkie friends divulge that during the NFL season their seductive and sensual daydreams take a close second to the thoughts of a prolate spheroid, or what we call a football.

What’s a woman to do when her man loves the TV and his beloved Patriots more than you? EMBRACE it Ladies!  You have three nights to contend with, Monday, Thursday, and Sunday night football. Then, when you think you’ve had enough, he heads to his buds for a Saturday afternoon of college ball!  And what about those BOWL games, season ending PLAYOFFS, and SUPERBOWL, SUPERBOWL, SUPERBOWL? It’s reality! If you can’t beat them, join them!

GET YOUR GAME ON! Pick a team, hopefully his, buy a sexy jersey or tank top, throw on some jeans and learn the rules. You will rock his world! Don’t stop there! Learn the lingo! Shout “Roughing the Passer, Personal Foul, and Clipping”! It will be magic to his ears and the only holding call will be him giving you the reach around! Then whip up some wings, nachos and taco dip for a little half time snack that will involve more than just food! There is truth to the saying, “A Way To A Man’s Heart Is Through His Stomach”.

JEALOUSY Will Kill Ya! Your man is not cheating on you! Sure, he’s obsessed with the eye candy, but it’s not the perky, well endowed cheerleaders in scantily clad clothing! It’s the burly men in tight pants, running up and down a field, hitting and tackling each other to gain control of an odd shaped ball.  And why do they always smack each others butt? Take advantage of the situation, throw on some daisy dukes, his team jersey, and some sexy boots for a post-game show of your own!

Should you distract your football obsessed man? NO! WHY WOULD YOU? This will only irritate him, especially if his team is losing. As they say “Let Sleeping Dogs Lie”! Have your own game plan. Check the score at half-time. If he is red faced and his ears are steaming, “Get Outta Dodge”!

Ladies, don’t revolve your world around these cavemen! His time is your time! If you’re not a fan of FOOTBALL FRENZY, go to brunch, shop till you drop, or maybe get a mani-pedi? This is your time to fly solo, me time, or hang with the girls!  Leave those kids home with your beer slugging, wing munching man! You have seventeen weeks of Sunday Fun-days! Don’t feel like you are abandoning him! He will be the first to kiss you goodbye and slam the door! Don’t take it personally… it’s just GAME DAY!